The hardest day I have ever had as a pet sitter was on that Tuesday. A week ago. I was at Dayna’s in Sorrento and I was in the main house. That’s when I heard the dogs just going crazy with their barking. I opened the back door and the barking just sounded different. It was without a doubt a warning bark. That one of them was in trouble. I started to run  and that’s when I heard it. One of the goats was screaming for their life. Just like with dogs you can identify your dogs bark, well goats are the same way.

This day I couldn’t tell who it was because I never heard the sound of a Baaah in pain. I never ran so fast. I reached the first goats stall and they were all there and alive. Then I reach the second goats stall and I could see only three of them. So I lead over the half-door and that’s when I saw it. One of the newly rescue dogs had somehow got out of its dog run and was attacking Thumbelina. I opened that door and grabbed that dog to get him off of her. The goats ran out of their stall for their lives. 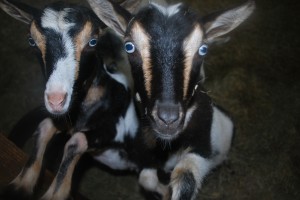 Once I got the dog secured I was able to get a good look at the goats. That’s when I realized Snuggles had taken the worst beating by the dog. Under his chin was a chunk of flesh gone and I could see straight to his muscle and bone. There were bite holes all over their necks.  They were going into shock. I gave them water and I called Dayna and she told me to put a little corn syrup in their mouths.  I don’t know how I did it but I managed to get all three of them in a pretty small crate. I met Dayna halfway to the vet in Maitland.   I was heartbroken, scared and so angry at that dog for trying to kill them. He had the taste of blood and he was trying his best to kill the goats. I know he would have if someone wasn’t there to stop him. I cried for hours. That night when I got home my husband looked at me and said to me that as long as I have been a pet sitter I have never come home looking so bad.  So I went to look at myself in the mirror and I had hay, goat bedding, goat poo and blood all over me. I didn’t mind any of it as long as the goats lived. For all of you who said prayers for the goats thank you because they were answered. The goats are recovering and will be just fine. The dog had to go back to the shelter. There was no other choice. Never a dull moment as a dog walker.