I have posted a few things on Facebook about Lily. Here is the whole story.

Dayna from Sorrento is always looking to save a dog in trouble. It just so happen that it came to her attention the deplorable conditions of the Putnam County Animal service center. Dayna told me that the facility was so bad that this one is like taking the dogs from the streets and putting them in  even worse conditions.  Now you know that place is horrific if Dayna is saying that. 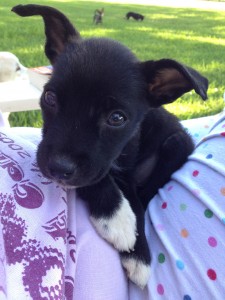 Lily fighting for her life. Please keep praying. It's working.

Lily was saved June 15th, 2012. Lily was a stray and was near death. One of Dayna’s volunteers agreed to go pick her up after the weekend but once the description was given of Lily, Dayna knew she would not make it through the weekend. Dayna decided to take the 2 hour drive after work and rush her to the emergency vet. After an hour and a half drive to the vet, Lily was given a blood transfusion and lots of fluids. Lily was only 3 lbs. It was a start. She had a will to live but was she strong enough to fight. She was covered in fleas, had a staph infection on her skin, full of intestinal worms and anemic. Dayna’s vet even brought her a bag of fluids to her home so that Dayna could inject the fluids  under the skin.  She was in desperate need of those fluids to survive the weekend. By Sunday she was able to lift her head and was eating and drinking. 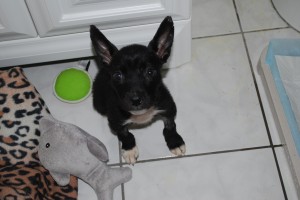 Lily sitting up real good on her own.

On Monday, Dayna’s she took Lily to her regular vet in Longwood.  Several test were done and that’s when we found out that Lily had Parvo.
It was heartbreaking. We just didn’t know if she had the fight in her to beat the odds of this wicked virus. Lily spent several days at the vet and it was  important that Lily hold her own. So far she has. Lily is back at Dayna’s, recovering and is on plenty of medicines and is getting stronger with each day. Once she is given a  clean bill of health, she will be fixed and then we will start looking for a forever home for her. She is super special. I get to see her tomorrow and can’t wait to take her on a little dog walk. As a pet sitter, this is so rewarding to see this little girl grow stronger with each day.  I’ll keep you all posted on her recovery. Thanks for all the prayers.